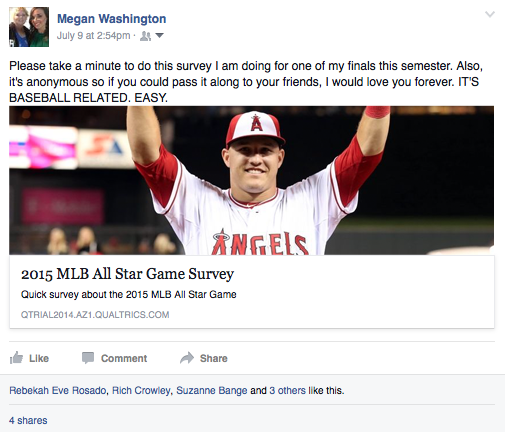 They say sometimes if you want something, you just need to ask for it.

This is very true in the case of gaining more likes, retweets, favorites and shares across the social media landscape. Seems like an easy concept, doesn’t it?

As a reminder, posts that include hashtags and images will generate higher engagement.

Try crafting your post to include an image, minimal text that is straight forward by telling your followers what you want them to do and include hashtags (try to keep it down to two).

This following image is from my personal Facebook account that is set to private and does not have a large reach.

This works for both personal and business accounts. Give it a whirl.

To cover the opposing end of this: Some may argue that Facebook “punishes” posts that are “like-bating”. The objective is to produce and share quality content. Check out the numbers.

We look forward to helping you generate buzz about your brand! We'll be in touch soon.

We hate pop ups too, but promise that you'll love our free monthly social media tips.